Hong Kong was first occupied by British forces in early 1841. In April of that year the Navy erected matshed buildings - including store sheds and a naval hospital - on the site that later became the Wellington Barracks, but these were soon destroyed by the typhoon of 22 July. Minden, a third rate sailing ship, was then taken into use as a hospital ship for Navy personnel. The island proved to be very unhealthy, and between May and October 1843, fever killed 24 % of the troops and 10 % of the civilians there. In about 1846 Minden was replaced by Alligator, a sixth rate frigate which had participated in the first Opium War, and in 1857 by Melville, another third rate, which had been Rear-Admiral George Elliot's flagship during the early part of the war. In 1850 the medical staff consisted of a Surgeon and two Assistant Surgeons. In 1856 a Deputy Medical Inspector of Hospitals and Fleets was first appointed as senior medical officer, and in 1860 the medical staff consisted of the Deputy Inspector, a Surgeon & Medical Storekeeper, two Assistant Surgeons and a Chaplain.

In 1873 Melville was sold for HK$35,000 and the money used to purchase the Seaman's Hospital which had been first opened in Wan Chai in 1843 under the charge of Dr Young, who had been surgeon in the Honourable East India Company's iron steamship Nemesis, which had also participated in the Opium War. This water-front hospital, which had been supported financially by Jardine Matheson and Company

, the first commercial house in Hong Kong, and had flourished for many years, was by the 1870s running at a loss. A letter from Vice-Admiral Shadwell, the Commander-in-Chief on the China Station, reveals that William Loney, as chief Medical Officer on the station from October 1872 to January 1875, played a large part in the successful move ashore. After this move the medical staff consisted of one Deputy Inspector General, two Surgeons and one Chaplain. The hills on which the hospital - and the later Infectious Diseases Hospital - were built, were given the names Mount Shadwell and Mount Parish respectively (Commodore John E. Parish was the "Naval Officer Commanding" in Hong Kong between 1873 and 1876). The buildings were seriously damaged during the second World War, and after the reoccupation of Hong Kong by the British, two stories in the Queen Mary Hospital, founded in 1937 on the hill above Pokfu Lam Road, were temporarily taken over by the Navy pending a decision on a new naval hospital. In November 1946 the War Memorial Hospital on the Peak (Mount Kellett Road) was taken over and - after considerable refurbishment - taken into use in January 1949. The Ruttonjee Sanatorium, founded by family members in rembrance of Tehmi Ruttonjee-Desai, who died of tuberculosis in 1943, arose on the Mount Shadwell site (at the junction of Kennedy Road and Queen's Road East, now well inland as a result of land reclamation; the name Mount Shadwell does not seem to be in use today); in 1991 this was renamed Ruttonjee Hospital and expanded to a 600 bed general hospital. The Wah Yan College (a Jesuit School) arose on Mount Parish in 1953.

Only ten years after it opening, economy measures led to the closure of the new Royal Naval Hospital. The site was incorporated into new Matilda and War Memorial Hospital. The Matilda Hospital had opened in 1907, financed by a bequest from the businessman Granville Sharpe who had arrived in Hong Kong in 1858; it was named for his wife, Matilda Lincolne, who had died a few years previously. Naval patients were subsequently sent to the British Military Hospital, first on Bowen Road (opened about 1905; became a temporary site for the Island School in 1967), and later on Wylie Road, Kowloon. In 1995 the British Military Hospital, in its turn was closed (the Wylie Road building later became a Filipino Workers Development Centre), and responsibility for the health of Navy and Army personnel passed to military and civilian doctors working in the Island Group Practice. In 1997 British control of Hong Kong ended, and the remaining military and naval facilities were transferred to the Chinese People's Liberation Army. 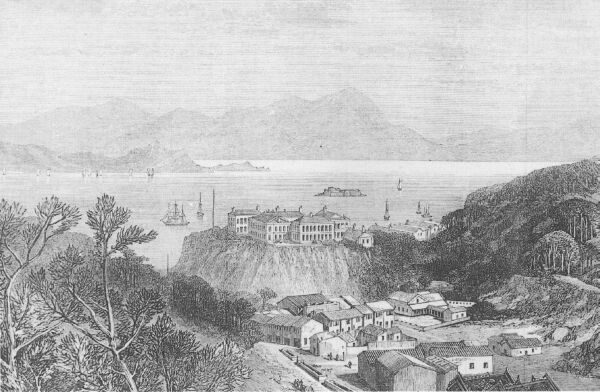