William Loney was briefly "in charge of invalids at Ascension" in May/June 1846. He himself was invalided from HMS Pantaloon on 11 July 1846 when a "survey held at the Hospital at Ascension" found that he was "labouring under Dyspepsia and General Debility and recommended to return to England for the reestablishment of his health". As there was no other medical officer available, however, he was immediately ordered to take temporary charge of the sick at the hospital by Arthur Fleming Morrell, Commander of the store ship HMS Tortoise (and Governor of the island). After about a month he was relieved and returned in HMS Vixen to Portsmouth, where he arrived on 1 July.

The Admiralty records in ADM 104 show that in July 1850 he sent the Admiralty "an order from Commander Morrell to take charge of sick at the Green Mountain, Ascension, together with a certificate of his having performed that duty from 12 May to 30 June '46 & requested that record might be made of such service as sea time". On 6 February 1851 the Board very properly decided that the "above time be allowed as service time."

The island now known as Ascension Island, was first observed by the Portuguese, in 1501 by João da Nova who named it "Ilha de Nossa Senhora da Conceição" (Conception Island), and again - on Ascension Day - in 1503 by Alfonso d'Albuquerque, who landed briefly. In 1539 King John III of Portugal claimed sovereignty, but no steps were taken to exercise this. Over the years the island was occasionally visited, but no attempt at occupation was made. In 1815, when Napoleon exiled to St. Helena, the British Rear Admiral Sir George Cockburn found it necressary to annex the island to prevent its possible use by the French as a rescue base. On 18 October 1815 Captain James White of H.M. Sloop Peruvian, and Captain Nicholas Charles Dobree of H.M. Sloop Zenobia went on shore and took possession of the Island in the name of King George III. The island itself was commissioned as a sloop in 1816, with a complement of 65; "ship's" logs for the period between 26 August 1817 and 31 March 1823 (with gaps) survive in the National Archives in London (ADM 51/4413 and ADM 51/4413, island commanding officers

). After the death of Napoleon in 1821 the island was used as a supply depot and sanatorium for ships of the West Africa Squadron. In 1823 responsibility passed to the Royal Marines and Lt. Col. Edward Nicholls R.M. was appointed Commandant. On 3 November 1828 Nicholls was replaced by Captain William Bate (arrived 3 November 1828 - died of influenza 15 April 1838), and a new phase began. In June 1829 Captain H.R. Brandreth of the Royal Engineers arrived to report on Bates' development proposals. He found "A small town or rather village had grown up near the roadstead, which on my arrival consisted of a collection of miserable tenements, with walls put together without lime, and harbouring vermin; roofs of canvas or shingle and floors of sandstone or tarras. The hospital which occasionally received the sick of the African Squadron was placed in a hollow, and consisted of four rooms, each about 16 feet by 11 feet, and the Africans occupied wretched hovels dark and filthy. A victualling store, a tank, and a small stone tenement for the officers, were the only buildings that redeemed the settlement from the appearance of an African village." He developed plans for a new settlement of Georgetown.

The following engraving (larger version), entitled "Georgetown, and the new buildings from Goat Hill", by Lieutenant William Allen RN, shows the new settlement in about 1838; the new Garrison hospital, completed in February 1833, is towards the right hand side. Later a Zymotic (isolation) hospital and a Krooman's hospital were also built in Georgetown.

The following engraving appeared in the Illustrated London News in 1874 (when the possibility existed that the island would be used to treat the wounded of the Ashantee War then being fought).

This engraving shows the Mountain Hospital or Sanitorium, on which work started in about 1860 and was completed in about 1867. Records indicate it was never used on a regular basis - perhaps the long journey 2000 ft up from Georgetown along a treachourous winding road saw to that. This buildingreplaced an earlier wooden structure where William Loney would have served in 1846. The 'San' was mothballed in 1875 and only occasionally pressed into use if a ship arrived with fever victims. It was permanantly closed in 1884, but used as a Mountain Residence by the Cable & Wireless

manager in the 1920's. From 1964 the Colonial Office appointed a island Administrator

, and this became his residence, which it has remained to this day. As the following photo shows, most of the building was demolished leaving only the single story part. 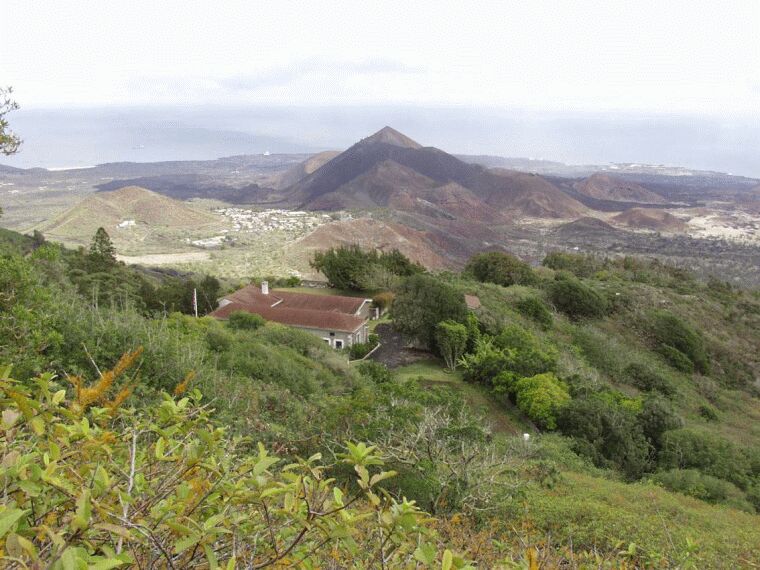