The island lies about two degrees north of the normal cyclonic zone, but on the afternoon of April 15, 1872, a southwesterly gale which had been blowing since daybreak increased to hurricane force and, shifting round the points of the compass, raged till nightfall with undiminished frenzy. At an early stage the down-pour of rain converted the narrow streets of the town into rushing torrents while the wind brought down the walls of houses, swept native huts away, and uprooted regiments of trees. Of the second act or 'return gale' [Consul John] Kirk writes:

"The first gust drove in the windows of the Agency and of my quarters, broke open doors and threw tables and couches in confusion against the opposite walls.... As the sea rose, sheets of salt spray and rain drifted in at the broken windows and filled the rooms a foot deep with water.... The sea was driven with such force as to undermine and sweep away the whole embankment of stone and double row of wooden piles that protect the foundations of the English, German and American consulates.... The consular office was burst open by the wind, and a teak chest, in which many valuable documents were preserved, and all pigeon-holes, in which matters of current business were deposited, gutted of their contents. Next morning I recovered in the street many government orders and confidential memoranda together with the bulk of our mail which should have gone next day, but other documents of importance are utterly lost.... In my own quarters... the floor of the drawing-room was covered a foot deep in water in which books, pictures and china, etc., etc., formed a confused and sodden heap."

The repairs to the consulate cost £2,000; but that was a trifle compared with the losses of the Arab land-owners. At least two-thirds of their clove and coconut plantations had been destroyed; and, since new trees would not bear fruit for many years, the loss was incalculable. All the ships in the harbour, moreover, with the single exception of the Abydos, bound for London, which managed with high steam-power to get out to sea, were sunk or wrecked on shore. The Adèle O'Swald, belonging to the leading German firm, Wm. O'Swald and Co., succeeded in escaping from the harbour but was driven ashore and lost with all hands. A London ship, the Liberia, was wrecked. About 150 Arab and Indian boats were sunk or stranded, many of them full of cargo. But the most signal disaster was the damage wrought to the little navy in which Seyyid Said, its creator, had taken a special pride and handed on as personal property to his successors. Its flagship, the frigate Shah Allum, was completely wrecked: so also was the Suliman Shah, just arriving from Bombay. Three steamships and a corvette were thrown ashore and more or less badly damaged. For the moment, at any rate, the Sultan's power as well as his pocket had seriously suffered: for, though the efficiency of his fleet as an instrument of war was doubtful, its master's authority over the Arab seaports on the coast was ultimately based on it.

Effects of the Hurricane at Zanzibar
(from a sketch by Lieut. Henn of the Livingstone expedition)
Illustrated London News, 1 June 1872 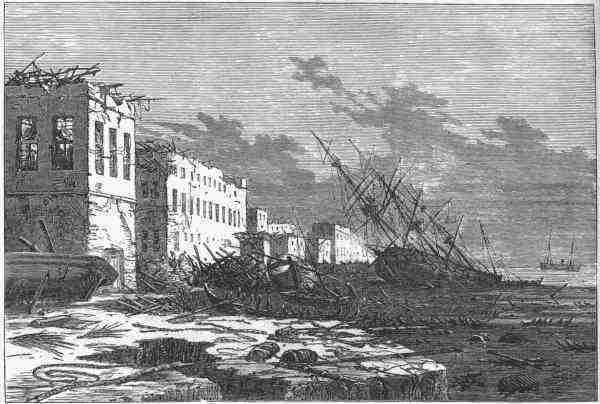